Tomaz is the current Chief Strategic Operations Officer & Intelligence Officer assigned to the USS Odyssey. A capable and loyal officer, Tomaz was assigned to the ship for its mission to the Delta Quadrant due to his expertise in Delta Quadrant affairs. The son of two prominent politicians on Barzan, Tomaz was eager to leave his homeworld when he was old enough and was supported by a Starfleet captain to attend Starfleet Academy. 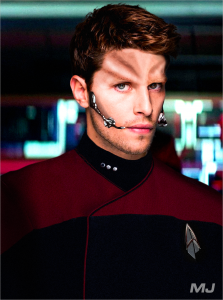 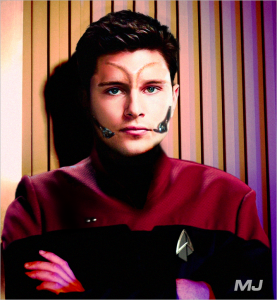 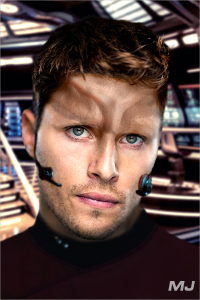 Born in the capital city of Barzan II, Tomaz’s early life was filled not spending much time with either of his parents due to their governmental work. Instead he was raised by numerous childminders until he was old enough to attend a boarding school. It was here where he decided to work extremely hard to get the grades to apply to join Starfleet. A visiting Starfleet captain to the school caught Tomaz’s attention and the young man went out of his way to impress the captain with his eidetic memory and athletic prowess. With his exceptional gifts, Tomaz was supported to apply to Starfleet Academy. This move was supported by his parents, who saw it as a political move to show how good their family was in the eyes of he public. Eager to leave Barzan behind him, Tomaz underwent surgery to have his breathing apparatus augmented to him.

Adjusting to life at Starfleet Academy didn’t take Tomaz long as he was used to the independent lifestyle from home. He completed the Starfleet Academy Preparatory Program with flying colours and after six intense weeks he took the entrance exam. His efforts paid off when he was allowed to start at Starfleet Academy in the fall. In his first and second years, he found himself enjoying all of his classes and found it difficult to pick a specialist area. Due to his high grades, he was invited to join Red Squad as his professors and instructors believed he had leadership skills that needed to be developed further. As such he was sent to the Mellstoxx III orbital campus where he spent some time on the USS Exeter, the campus’ training vessel. Enjoying his time on Mellstoxx, Tomaz went on to finish his last years specialising in astronautical tactics and history.

Assigned to the strategic operations department on Starbase 185 in 2394,  Tomaz learnt a lot when the station acted in a critical role of supporting Starfleet in keeping the remains of the Romulan Star Empire in check. On many occasions he was given command of a small team that would take a runabout to patrol the border and assist those who needed help. The humanitarian crisis grew and Tomaz found himself finding it difficult to remain objective in not helping those who needed it. During one mission where he had to choose to either return to the base or answering the distress call of a Fenris Ranger ship, he decided on the latter. His team were able to save the crew who were transporting refugees out of the area. For their actions the team were commended for saving lives. Two years later and he was promoted to assistant chief strategic operations officer with the rank of lieutenant junior grade.

His superior officer decided to give Tomaz his own team that would regularly patrol the border and gain valuable intelligence and insight on what was happening within the destabilised Romulan Star Empire. Commanding an Arrow-class runabout for several weeks at a time, gave Tomaz the confidence to build his leadership skills. His team would visit regular worlds and provide some aid when they could. This time gave Tomaz the chance to build a good network of contacts too in gaining strong intelligence for Starfleet as well.

Assigned to the USS Ma Huan, an Inquiry-class starship, in a duel role of being its new chief strategic operations officer and contact specialist, Tomaz excelled in his new post. The ship had been placed on patrol along the border of the Cardassian Union and on many occasions it would support Federation colonists and shipping that were under attack by pirates and raiders. Thanks to Tomaz’s efforts in analysing a range intercepted communications against sensor readings and intelligence reports, the Ma Huan was able to determine the location of three bases operated by the mercenaries. With swift action, the ship was able to take all three out and arrest several dozen culprits who were responsible in leading the attacks.

Wanting a bigger challenge, he was offered a promotion and the position of chief strategic operations officer on Starbase 38 in mid-2399. Happy to showcase his work back on his homeworld, Tomaz accepted the offer and returned home. However he soon found his political orientated parents more keen on using his positions for their own gain, so when Starfleet ordered elements of the Fourth Fleet into the Delta Quadrant he made a request to transfer off the station. He had only been there for two months and felt he couldn’t remain there anymore.

Joining the Odyssey before it entered the Barzan wormhole, Captain McCallister agreed to the transfer and could see Tomaz’s potential in being a key asset in his ship’s success while in the Delta Quadrant.